You are here: Home / Sustainability / BioBlitz 2017

May in King Henry’s Walk Garden brings a magnificent array of wildlife: butterflies, hoverflies, several types of bees, creepy-crawlies of all kinds, wildflowers, and many sorts of birds. The varied habitats of the garden: the allotments, the pond and the woodland are home to very different species. This year we decided to systematically monitor the Garden’s biodiversity and on May 21st held our first BioBlitz. Our aim was to identify as many species of flora and fauna as possible in two hours. We were fortunate to secure the help of experts: Will Atkins on pond life, Hannah McDowall on insects, Clare Jeapes on birds, and Nicola Freshwater on plants, assisted by Annie Chipchase of the London Natural History Society who kindly responded to our plea for assistance. Members of the Garden pootled around looking for species and asking the experts to identify their finds. The many wondrous creatures included caddis fly larvae, some covered in small shells, others with bits of plants and debris; swifts, which I had not noticed before; and hover flies, lovingly examined by Hannah who described their life cycle. 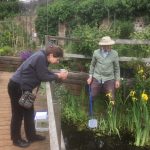 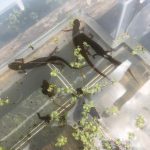 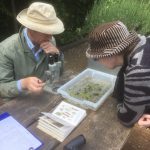 We have established a list of the flora and fauna found during the two hour blitz. These are published below and will act as a baseline for comparison with future blitzes which we aim to carry out annually. We were fascinated to learn from Will Atkins that our pond had some unusual species, but some relatively common species were missing. We hope through these BioBlitzes to encourage the Friends of King Henry’s Walk Garden to take an ever greater interest in our biodiversity. 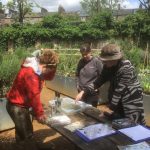 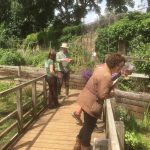 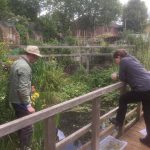