You are here: Home / About the garden / Some history of the site

This beautiful organic garden site has a varied history. John Snow’s 1859 map just shows open space, though the surrounding roads are already in place. Charles Booth’s 1898/99 map shows the area as a timber yard, but a look at the surrounding area reveals that there were many nurseries in this part of London, so our garden is in keeping with local tradition.

In fact we believe that by 1858 the site was occupied by Thomas Docwra whose firm, Thomas Docwra & Son, founded in 1865, remained at this address until 1922. Their business was described as ‘Contractors for gas, water and public works, well sinkers and borers’, and the name Docwra’s Buildings is still in use for a turning off King Henry’s Walk.

These are some of the Victorian stoneware ink bottles that were found when the site was being relandscaped in 2007. Gary Bettis from Oregon emailed us to say he has a similar ink bottle bearing a label stating ‘HOLLIDGE’S WRITTING FLUID // MANUFACTURED BY E.J. HOLLIDGE LTD // KING HENRY’S WALK, LONDON // ESTABLISHED 1861 (or 1851?)’.

We have little information about how the site was used for the rest of the 20th century, but at some point it passed into the hands of Islington Council and was laid out as a park and rose garden. This plan shows how similar in layout it was to the current garden. Unfortunately the park suffered from severe vandalism and had to be closed to the public. From 2001 till 2005 it was used as temporary accommodation by St Jude’s & St Paul’s School while their school was being rebuilt.

In 2004 Islington Council began a consultation procedure with local residents with a view to establishing a community or wildlife garden, and in May 2005 the Friends of King Henry’s Walk Garden volunteer group was formed to see the project through to conclusion and to manage the new garden.

Henry VIII is reputed to have owned houses at nearby Newington Green, and in his History of Islington, published in 1811, John Nelson refers to this tradition:

A very old inhabitant of the Green recollects, that more than half a century ago, when some of the present houses were erected, several vestiges of other ancient dwellings of considerable magnitude were removed; and the tradition of Henry’s resorting to this place is further supported by the circumstance of a very pleasant path, which winds from the South-east corner of the Green to the turnpike by Ball’s Pond, having been called, time immemorial, by the name of “King Harry’s Walk.”

Nelson reproduces a map dating from 1735 that shows the walk marked in just the same place as it appears today.

William Hands (1811-91) lived at No.11 King Henry’s Walk from about 1870 until his death. He and one of his sons operated a hot press printers from that address (perhaps they were the source of the ink bottles?). His widow Elizabeth is shown on the 1901 census return, aged 87, and their daughter Mary Ann, known as Pollie, probably continued to live in the house until her death in 1938. The photograph is of William and Elizabeth, taken around the time they moved to King Henry’s Walk. 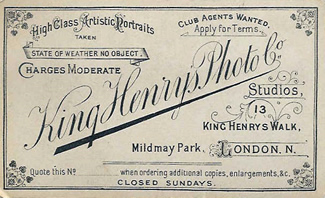 Thomas James Hands (1852-1933), the youngest of William and Elizabeth’s six children, had the lithographic/photographic studio next door at no. 13 at the turn of the 20th century. The scan shows the back of a photograph taken in about 1909.

This information was supplied by Val Holmes, great-great granddaughter of William Hands.